Return to news
The officials and experts discussed reforms of the Ukrainian defence industry and the strategy for victory in the war with Russia in the French Senate. The conference was held in Paris on November 14, 2022. Following the press conference, the influential French magazine Diplomatie published a special issue devoted exclusively to these issues.

The vice president of the French Senate, Roger Carucci, opened the conference with a welcome speech. 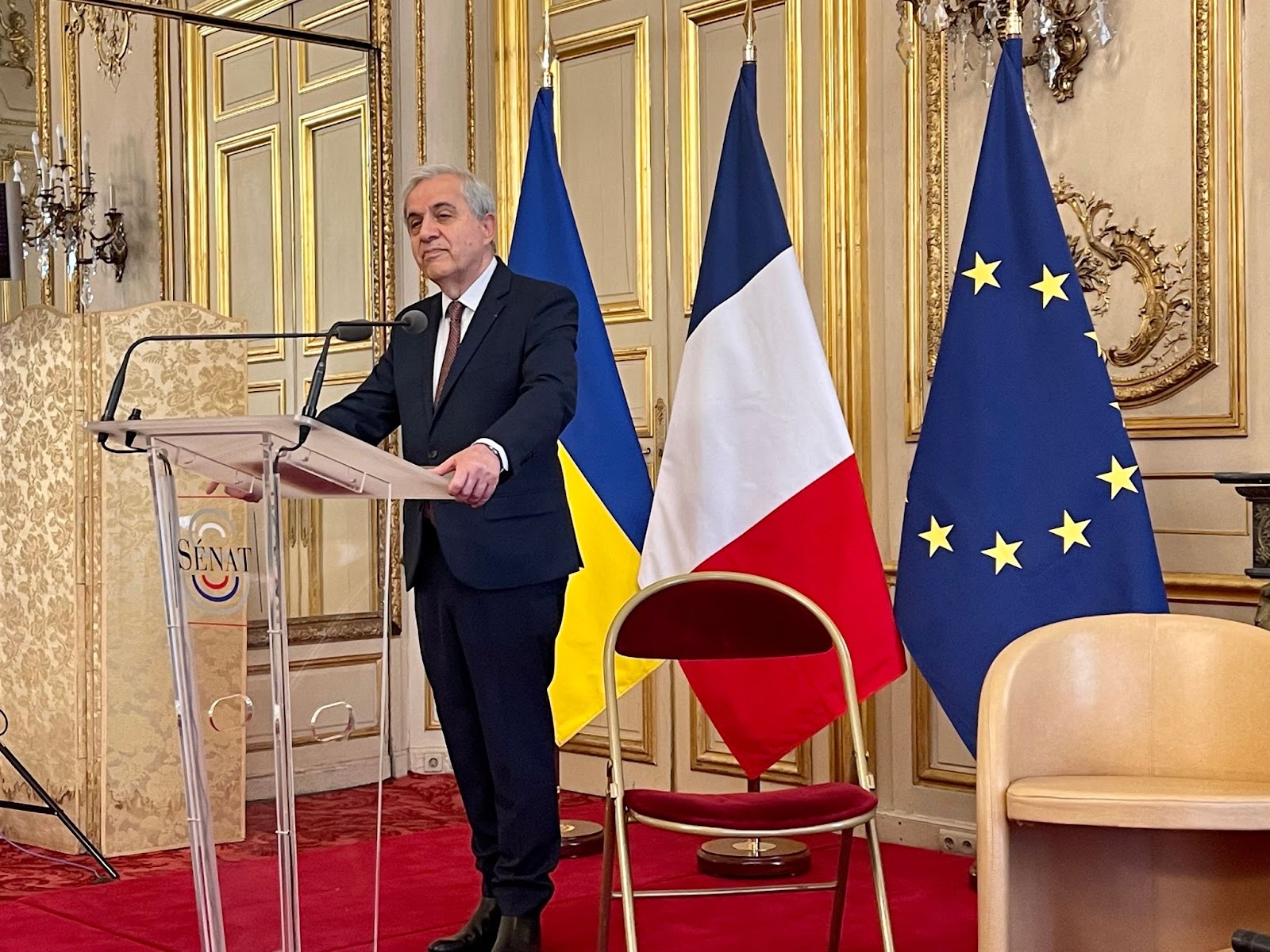 "War is knocking on Ukraine, and in such conditions, Ukraine courageously defends the agenda of democracy," he said. Therefore, according to him, organizing such conferences with representatives of Ukraine and France is vital to support Kyiv in this struggle.

Nadiia Solohub, Head of the France-Ukraine inter-parliamentary friendship group at the Senate, emphasized that military aid to Ukraine should not decrease. She added that this is not only her position but also that of many partners. "We cannot fail to punish those who constantly violate human rights and international law," Sologub said.

During the panel dedicated to security, the speakers discussed the reasons for Ukraine's resilience in the face of Russia's full-scale aggression and the needs of our country for further struggle. For example, Lieutenant General Michel Yakovleff, the former Chief of Staff of the NATO Joint Forces Command in Europe, said that he and most of his colleagues were amazed at how unprepared the Russian army was for an offensive.

NAKO Executive Director Olena Tregub said that among the reasons that weakened Russia and its army was the lack of reforms in the security and defence sector, similar to the transparency reform that Ukraine is implementing in the defence-industrial complex.

Independent defence expert Volodymyr Datsenko, who, in cooperation with NAKO, prepared an article for the special issue of Diplomatie about Ukraine, focused the audience's attention on the fact that the entire Ukrainian nation is currently waging armed resistance to Russia. The whole country has become an army, - believes Datsenko. Another critical component of the recipe for Ukraine's stability in the fight against Russia is our strategy's maneuverability, which helps us stand still, defend, move and win. 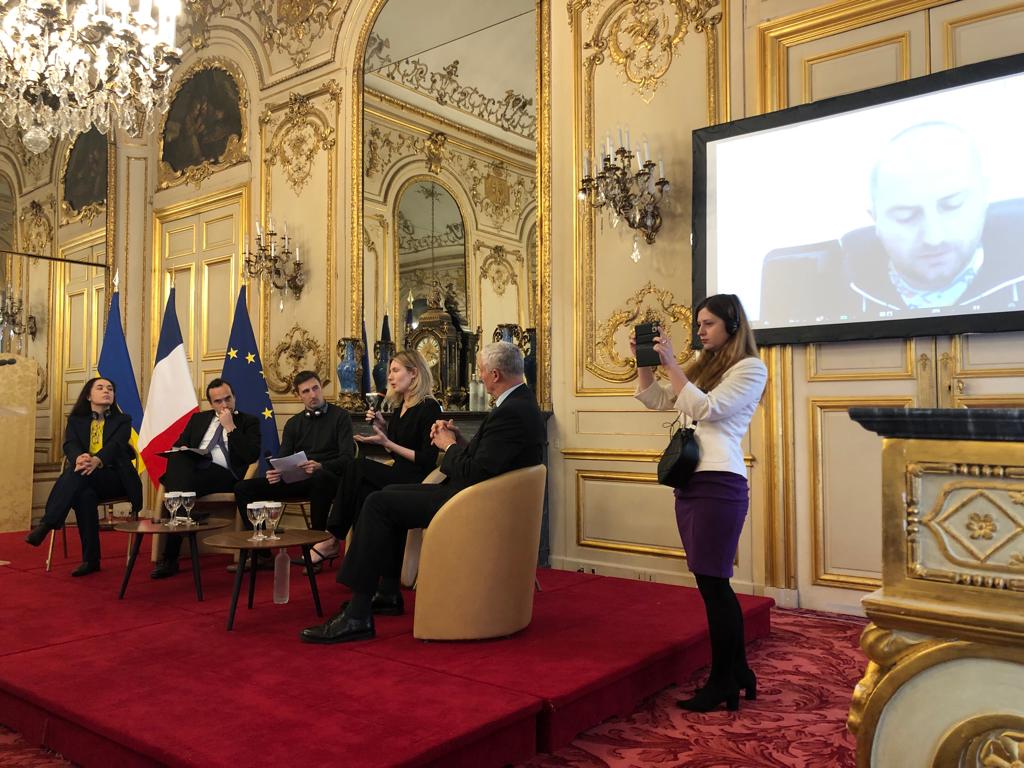 Indeed, the NATO countries’ assistance radically affected the war and helped Ukraine withstand the fight, Dotsenko emphasised. He added that there were many warnings and doubts about whether certain weapons would help Ukraine. At the same time, he is convinced the world has seen how effectively the Ukrainian army uses the weapons it has received and how much it helps to deter Russia. For example, thanks to the Stingers provided, Russian aviation no longer tries to attack as massively as before.

Olena Tregub said that Ukraine and foreign partners are currently working on launching joint production of weapons outside Ukrainian territory. At the same time, she emphasised that military aid from foreign countries should come without delay to help Ukraine resist Russian aggression in the future. There should be no pauses in the short term.

"We cannot wait until Ukraine and its partners launch joint defence enterprises in safe territories together with their partners. We need weapons now," she added.

According to Michel Yakovleff, the current strategy of NATO is a big defeat. He recalled 2014 when Russia annexed Crimea and started a hybrid war in Donbas. He said that at that time, a large group of people in NATO wanted to avoid a confrontation with Russia, if only not to start a 3rd world war, and therefore they suggested waiting. Now the world has seen the consequences of this strategy, - Yakovleff emphasized.

The French researcher Florent Parmentier spoke about the need for a stable and lasting peace instead of a cease-fire. He noted that peace should be based on the principle of justice. A bad peace is not an acceptable solution. He said there are currently two groups in the West: representatives of the so-called peace party and the justice party. Parmentier noted that despite the economic difficulties in many countries, Western countries are currently managing to maintain a united front in support of Ukraine. At the same time, the researcher does not expect a quick and easy peace because several attempts have already been made, and they have failed.

All the speakers of this panel were unanimous in their appeal to the collective West to continue supporting Ukraine, particularly with weapons. The effective resistance to Russian aggression and victory in the war will be impossible without it. Especially considering Ukraine had already lost on the battlefield the weapons it had at the beginning of the war.

Nobel Peace Prize laureate Oleksandra Matviychuk, Head of the Center for Civil Liberties, made the final speech. She shared her experience documenting Russia's war crimes. She called for all war criminals to be brought to justice in international tribunals, particularly the presidents of Russia and Belarus, Vladimir Putin and Alexander Lukashenko.

It was the first major conference on Ukraine in Paris since the beginning of Russia's great war against Ukraine. The French non-governmental organisation Eastern Circles and the influential French magazine Diplomatie organised the conference. Partners and co-organizers of the event: the French Senate, the Open Society Foundations, and the Eurasian Initiative for Peace and Development.

NAKO is grateful to Eastern Circles for the invitation and for organizing meetings with representatives of the French Ministry of Defence. The visit of NAKO employees to Paris took place with the support of the British Embassy in Ukraine and the British Special Adviser on Defence.